Two books I read recently are crime novels by a author who is from England but now lives in Tasmania, Alan Carter. Both books are crime novels both set in New Zealand, in and around Marlborough Sound in the north of the south island. They are both about the same character, a cop from northern England named Nick Chester who moves to New Zealand to escape his past after a failed undercover operation there. 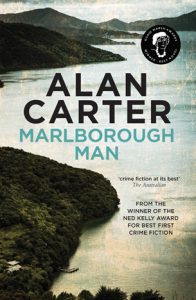 The first book’s called Marlborough Man and I found it very detailed in the way he describes the surrounding environment. Nick Chester lives in a little house by a river with his wife Vanessa and his son Paulie who has down syndrome. People from his past track him down there, as well as a disappearance and murder of some local kids by a predator calling himself the Pied Piper. Nick teams up with his buddy colleague Constable Latifa Raptata. Their actions revolve around tracking down the killer, looking into the locals’ lives and their past, and also he has to deal with some pretty nasty bits of work from his past. 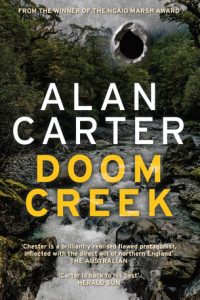 The other book is called Doom Creek and that is a kind of follow-up from the first but I didn’t like how it started and the end of the first book was better. It starts with gold miners prospecting for gold in the river and one ends up dead in the back of a supermarket and a film crew comes to town and an earthquake rocks the area. Half a body is discovered and a past murder case is reopened and some gun loving Americans move in to escape to a bolt hole, coming under suspicion. And all that on top of a brain tumour in the main character. I found it confusing following the story but the landscape description was written very well.

I thought, about these books that they should be read with a lot of concentration and I just couldn’t get to grips with pronouncing the traditional New Zealand language and names. I got tongue tied but anyone into a gripping crime novel would really enjoy these books I think, and have in your mind while you’re reading it the New Zealand landscape. Give it a try, you might find you like them.