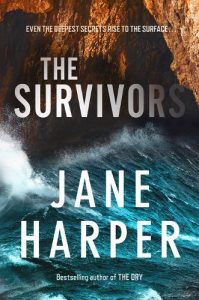 Recently I read a new book by an author called Jane Harper who has written a number of books, the first one being The Dry. That was turned into a current film.

The Survivors is a psychological murder book about a group of friends from childhood all meeting again after good number of years and a murder occurring in the small town by the name of Evelyn Bay, a fictional town on the east coast of Tasmania somewhere. All is revealed along the way through the main character and his father who has early onset dementia and his mother wont forgive her son for a past events. That slowly seeps out as it delves into the minds of the characters as they have haunted memories about a terrible storm there that happened ages ago.

I thought the book was good with not too many characters to juggle around and it was good as it explained the back story of why those characters felt that way in their current state. It jumps from being very descriptive relating the environment around the fictional sea side town of Evelyn Bay, which I thought could have been any east coast town in Tassie, to deep inner thoughts of the characters and why they behave the way they do.

The book was quite intense reading but very well written. It’s best read when fully awake with a cup of coffee, you do tend to nod off if read to long and then you loose the plot and have to reread extract. Also find a nice quiet place with no disturbances to fully appreciate the story.

The book would appeal to readers who love a good psychological story it doesn’t have much intense action in it though, only from past memories, but you can really get into the characters and how they all connect with one another. It is a very coastal book with the sea feeling like one of the characters of it, you can picture the scenery well in your mind. I thought probably a book for adult readers male and female if you’re into that subject matter. I hope you will enjoy it as much as I did.