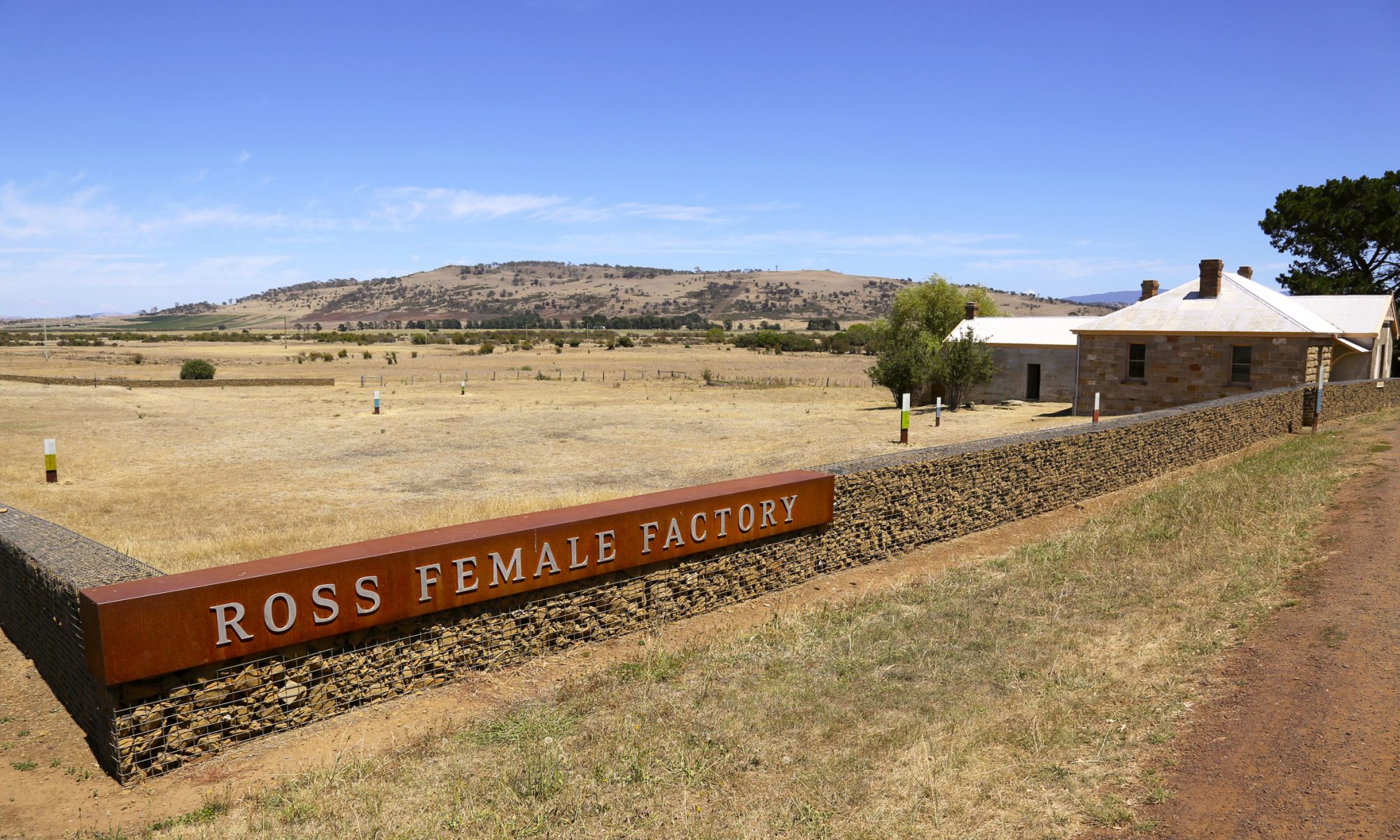 A few years ago I was asked to write some plays concerning women who had been incarcerated at one of Van Diemen Land’s places of convict confinement – the Ross Female Factory. Between 1848 and 1854 the Factory had been developed for use with convict women, as a workhouse, staging post for accommodation between assignments to colonists, and maternity hospital.  I was a bit daunted by the task. I always leaned far more towards escapism than towards confronting lutruwita-Tasmania’s dark colonial past. And it wasn’t just that it was dark, it was also, perhaps, just a little bit dull.

I grew up with that stuff – on the ‘penal Peninsula’. School camps weren’t really a thing at Dunalley District High School (which was, even then, more a primary school than anything else). Until all of a sudden they were. In about grade 5 the whole concept was suddenly foisted upon us. We were going away. With all the other kids. Staying in shared rooms, for three days! To Port Arthur… This was supposed to be fun. (It is the stuff autistic nightmares are made of.)

Somehow I survived the experience; but, as if having one’s own mother work at Port Arthur wasn’t enough? And frequently enough, one’s father too. During times when a babysitter might have otherwise been needed I had spent many hours there, roaming the ruins (they really could be roamed then, and climbed). I’d always done my best to imagine them not really penal relicts but, rather, towers, castles. The yellow stone, lidless gothic church and battlemented guard stations leaned obligingly into such romantic fancies.

Still more often I would simply turn my back on those vestiges to make the most of the site’s broad swards with my brothers. Its grassy banks, gardens and watery shores are like falling theatre curtains, bringing to an end the paltry human performance, returning us to the world.

But the older you get the more tolerable history seems to become. One actually wants to know things. It’s like looking for those lost bits of jigsaw puzzle you didn’t even know were missing, until, slowly, a picture starts to emerge. You began to want to know more. And, here I am, wanting to find some sense in the messy stories of my island. And there I found myself: being asked to write about women convicts. To loosen tongues long silenced. To attempt to right past wrongs. To find, perhaps, the faces, voices, experiences of my mothers, and my peoples’ mothers; those women whose whisperings still caress, and teach, and flagellate us.

I finally wrote two plays. You can read them if you want (find links below). If you would like to do more with them than simply read, please let me know.

I also wrote a paper with Dr Robert Clarke, which is about heritage interpretation in Tasmania and some of the challenges it poses. It contains an overview of past and current interpretative practices, and it reflects on one of the two plays, ‘The Caorthann Amulet and the Turkey‘. The abstract is below. If the paper is of interest and you can’t get access through an institution, please let me know and I’ll give you one of my precious free access links, if I still have any.

The Caorthann Amulet and the Turkey (PDF)

The Dark Turn: History and Performance at an Emerging Tasmanian Tourist Site‘ (Journal of Australian Studies)