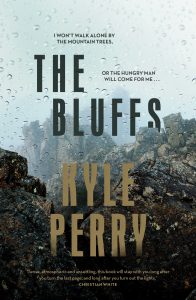 The Bluffs is a new psychological thriller by a new Tasmanian author Kyle Perry, set on and around the great western tiers in the fictional town of Limestone Creek. It is about a group of teenagers who go on a overnight school camping walk where three of them mysteriously disappear and a teacher is found after being unconscious, there is a strong belief that there is a strange monster up there called the Hungry Man but that might be an Aboriginal myth. The next morning the teacher is found with a head wound and a police search is commenced, one of the missing girls’ father is a known drug dealer. A police detective from Sydney and a New Zealand born one are assigned the case, it pusses them to breaking point at times since one of the girls is found dead at the bottom of Devils Gullet, and there are accusations of lies and sexual passion and finding the truth is not going to be easy. It will have an end to put you on the edge of your seat to find out if the Hungry Man is true or just a myth.

I thought it was a brilliant read the more you went into it the more intresting it became, with twists everywhere you didn’t know who was telling the truth and it just left you wanting to read it until the end. It jumps from place to place for a reason and it all comes together brilliantly at the finish. It’s a life that you probably wont choose going down that path.

I would recommend this read to an adult reader out of their teens to really get a feel of the goings on in some teenagers minds, and the pickle they end up getting themselves into when they don’t fully think plans through and the fallout and price they pay.