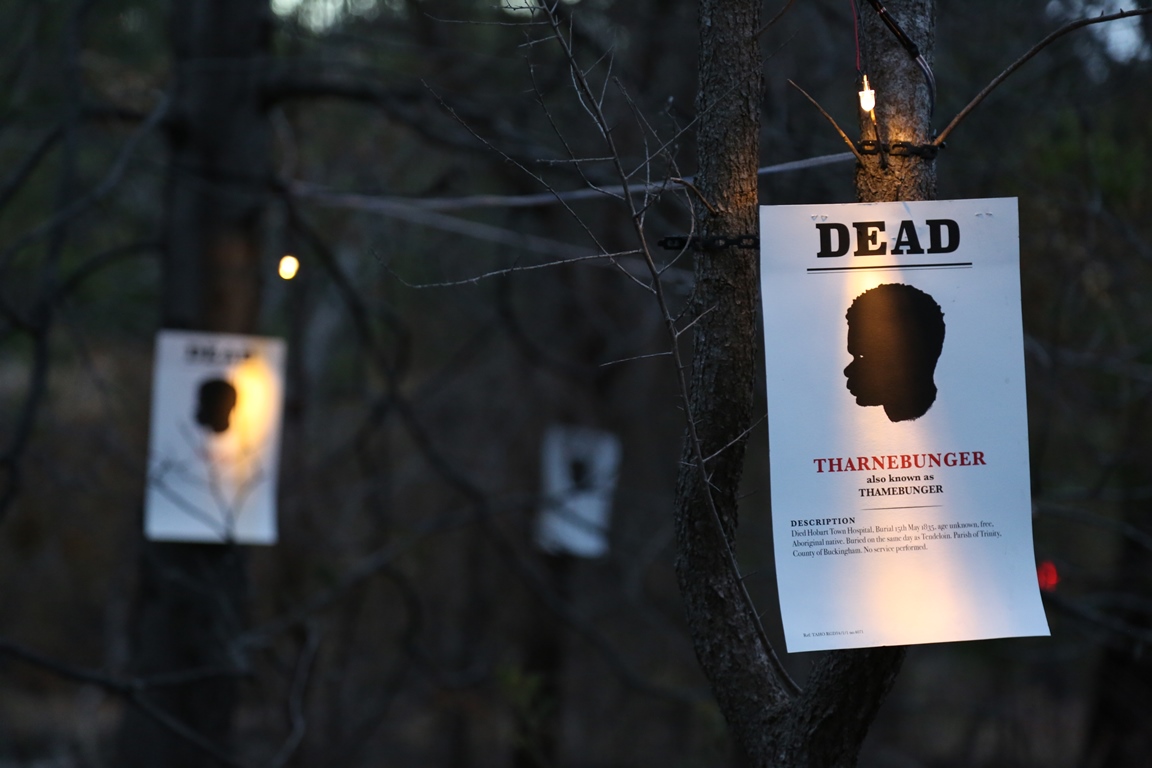 In the background of a photo of Julie Gough’s installation Ebb Tide (The Whispering Sands), 1998, over Lady Jane Franklin’s right shoulder, I can just make out my family home (Gough, 2018, p. 148). The house occupies a slight promontory, the land jutting into Eaglehawk Bay just enough to offer a view over the Neck. There is a creek just west of the house, which now barely ever flows. This is probably due to vegetation changes, dams and channelization along the course of the creek by land owning ‘improvers’, but also to climatic changes resulting from increased greenhouse gas concentration in the atmosphere, and also changes to the land surface within lutruwita-Tasmania. The immense hydro-electric impoundments of Lakes Gordon and Pedder have changed the land’s latent heat (heat holding) capacity and albedo (surface reflectivity), which affects how atmospheric air currents move over lutruwita-Tasmania and, in all likelihood, has contributed to a marked decline in rainfall over the State, measured since the 1970s (Tas. Climate Change Office, n.d., n.p.).

But this detour into the impacts of Western so-called civilisation has taken me away from my purpose, which was twofold. It reflects how I feel enmeshed in the wonderful web of Julie Gough’s work. But is also, to acknowledge how my family’s settlement at this site might reflect the displacement of Aboriginal people, for the qualities of this house site seem likely to have made it an attractive place for pydairrerme people – the Aboriginal people of the Forestier and Tasman Peninsulas (Ryan, p. 17). There seems to be a stone fish trap nearby, which we always thought was built by some fishing neighbour, but I think now it is probably much older. There are shells, although I am not sure if they are the remains of middens or shoreline deposits from a time of higher sea levels. There is so much we don’t know, but much that, surely, we could know, if we chose look harder. This is what Julie Gough does. She sifts through the archives and walks the land looking for hidden histories, bringing them to the light and exposing them to others. In a 1995 Artist Statement, she wrote:

The nature of my work is to raise questions in the guise of giving or searching for answers. My interest lies in locating the ‘real’ stories within the documented ‘Western’-given version of a past that hasn’t allowed for the perspective of any ‘Others’ involved (Gough, 2018, p. 6).

Gough’s work has often bisected my own search for the histories that help me make sense of this place, lutruwita-Tasmania. Sometimes this occurs in quite unexpected ways. Observance (video, 2012) records time Gough spent in the northeast, in her ancestral lands, where her ability to reconnect with her heritage was constantly undermined by run-ins with ecotourists. These encounters seem to resonate with the experiences Aboriginal people might have had. We can’t know what they felt, of course, but Gough’s work invites us to empathise.

In Observance I feel able to glimpse how Aborigines might have felt when invading Europeans made them fugitives in their own land. Although the context is quite different, I feel sympathy for them, as a result. I often feel swamped by outsider-tourists tramping all over my home and revelling. They seem to lack the depth of knowledge and respect that I have gained for it, from a lifetime’s immersion in this place. Experiencing this significantly deepens my respect Aboriginal people and my sympathy for them. Their knowledge of lutruwita extended far, far beyond my lifetime. So such bitter experiences are one way that we might glimpse and begin to understand what has happened to Aboriginal people.

Gough’s work continually destabilises my own stories though, and any feeling that I might have a more legitimate claim to this place than others. In Hunting Ground (Pastoral), (video installation, 2016), Gough has printed quotes from historical sources referring to the hunting and killing of aboriginal people. In one she quotes from the following article:

Joseph Johnson was my ancestor. He arrived as a convict in 1804. He had been a farmer or farm labourer in England’s southern Peaks District, and these skills probably made him useful to Lieutenant Governor David Collins. Once he had served his term he was granted land at Glenorchy and then at Green Ponds, where he made a home he called Tissington. In the nostalgic English way it was named after a village thought to be close to where he had come from. Being a convict and a worker of the land, and having arrived at the very beginning of the colony, it seems inevitable that Johnson would have had encounters with Aboriginal people, and in all likelihood killed some. He is reported to have had a child in his care at one stage. Could this boy have been an orphaned Aboriginal child? There is room for more work to be done here.

Where Johnson came from, in England’s southern Peaks, was not far from the home place of another, more famous convict – William Buckley. The two apparently became friends on board the Calcutta, the boat that brought them to Australia. Buckley, however, jumped ship in Port Phillip Bay and was not seen by Europeans for 32 years. He lived, during this time, with the Watourong people and had a wife and daughter among them. It wasn’t until about 1837 that he arrived in Van Diemen’s Land and met up again with Johnson.  Johnson invited him to Tissington, where Buckley claims to have lived an “indolent life” for three weeks (Morgan, 1980, p. 149). What stories did the two share? Did Johnson have qualms about his treatment of the Aborigines after hearing of Buckley’s life among them? I can only hope so.

Yet the desire for closure is something Julie Gough particularly aims to subvert, and she does it effectively. I recently assisted with the installation of her work Missing or Dead on the Queens Domain (Colonial name that is), as part of Dark Mofo 2019. This work consists of posters with the names and known details of the lives, and often deaths, of 185 Aboriginal children known to have lived with colonists. They are attached to trees in a quiet grove a little off the beaten track, many of them susurrating casuarinas, which seem apt hosts for this poignant memorial.

Putting up Gough’s posters, I found myself communicating, as it were, with the trees, wondering if they were the right tree for this child. I guess that involved reflecting on the child at some depth too. Sometimes I would come across names I recognised, like Black Mary, who lived with the bushranger Michael Howe. Affixing the posters in the cold and rain seemed almost penitential, although there was little time, then, for reflection – it was necessary to work quickly, in teams. So I went back later, with my family. This time dusk was just about to settle and with it came flocks of birds – so many birds, of such variety. It was tempting to see the birds as Elders, maybe even as the spirits of these children, and perhaps they were, but a desire to interpret things in this way might also come from a desire for closure or absolution. I don’t think it’s time for that yet. There are too many things still to turn over. Gough’s work is such an asset in this respect. She keeps us on our toes, keeps us learning and thinking. I will let her words close:

History isn’t static; it is recorded, maintained and changed by its interaction with time and what we all bring to it. I hope that by engaging with a work a viewer will apply their own cultural baggage to the comprehension of a piece and then perhaps realise their own proximity to or complicity in the fictionalizing, concealing and controlling nature of the documentation and transmission of  nation’s past (Gough, 2018, p. 6). 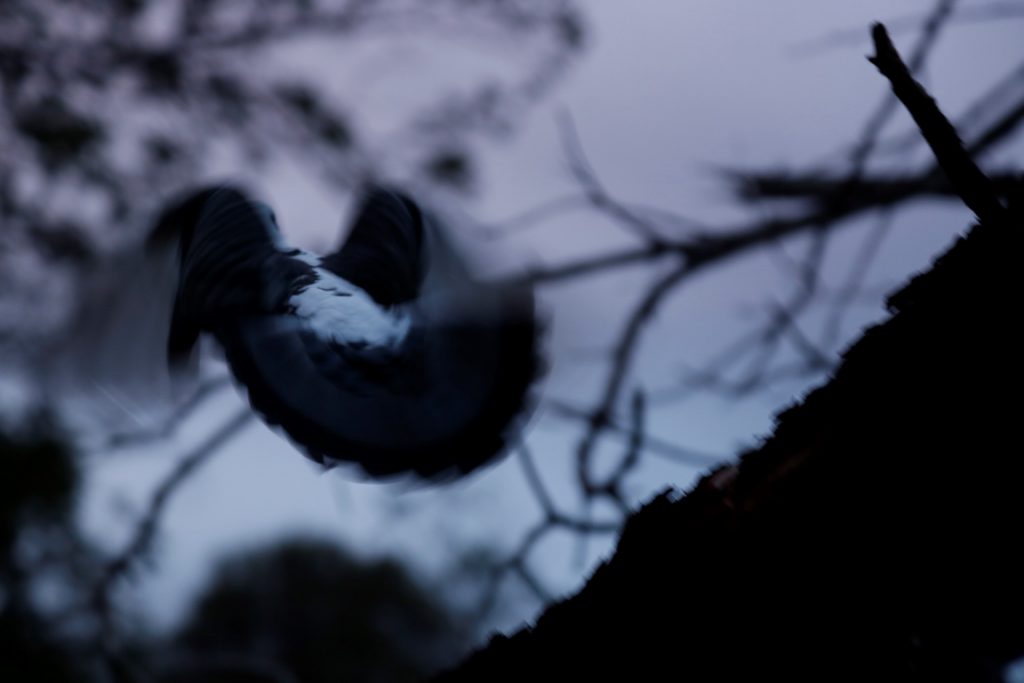 Julie Gough’s exhibition Tense Past is on at the Tasmanian Museum and Art Gallery until the third of November. It is not to be missed, especially if you’re a Johnson or Kearney descendant. Find out more here (including an introductory video).

The opportunity for me to be immersed in Tense Past and help with the installation of Missing or Dead was made possible through the Tasmanian Museum and Art Gallery, University of Tasmania and Gandel Philanthropy – thank you.

Morgan, John, 1980, The Life and Adventures of William Buckley: Thirty-Two Years a Wanderer Amongst the Aborigines of the Unexplored Country Round Port Phillip, ANU Press.