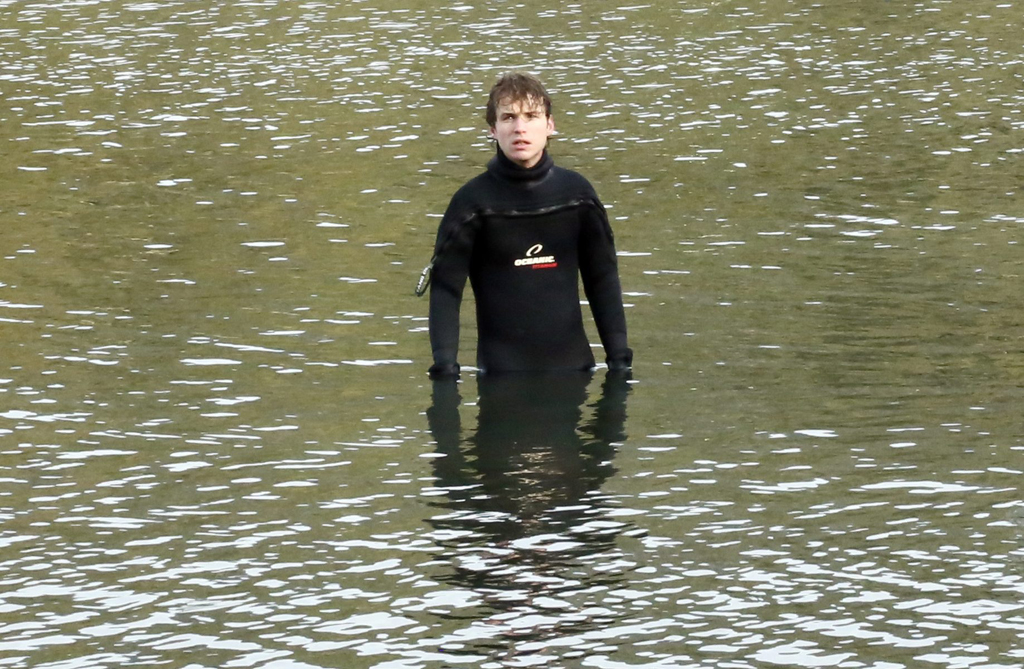 Over the last few months Bright South has been Production Assistant and locations scout for Melbourne independent filmmakers Golden Moss. This culminated recently in the filming of their new story The Diver, at a number of locations around the Tasman Peninsula. This was a mammoth task achieved in just 6 days, and was greatly assisted by the generosity of a number of locals, to whom we extend our heartfelt thanks.

The Diver is a short film, centred on a socially awkward young man, Callan (played by Nicholas Denton), who lives at home with his parents. Chaos and confusion rage inside him, but to anchor him, his parents, Malcolm (John Brumpton) and Helen (Dana Miltins), encourage him to grow and sell vegetables for neighbours (including Cynthia – played by Julie Nhill), and to go diving. Below the surface Callan feels released from the oppressively confusing ways of humans and discovers another world. His explorations of this world are fuelled by the stories of an eccentric older woman, Dorothy (Kaaren Fairfax). When something unexpected happens, the audience will be left with much to think about. It is hoped that some of these threads will be further developed if the short film is able help Golden Moss raise the funds to make a feature film possible.

This film showcases some great talent, including Director and Writer Michael Leonard and Co-Director Jamie Helmer. Their previous short film, The Knife Salesman, had its world premiere at the 74th Venice Film Festival and has since gone on to play at numerous festivals around the world. It operated as Proof of Concept for Grafton Point, which is in the early stages of development.

The Diver’s score is being composed by Jessie Warren and cinematography is by Giovanni Lorusso, with local Fraser Johnston responsible for underwater scenes. Driven strongly by its visual and aural atmospherics, The Diver will have the impressionistic style of the listening eye. It is sensitive to the emotional and other sub-cognitive chords of the world, which can deeply affect human relations and behaviour in ways we are only beginning to understand. Golden Moss’s decision to use these methods will enable them to tell a very relevant story with subtlety and great communicative power.

Teaming-up with production company Les Valseurs offers avenues for foreign investment in this project and access to the European market. It is great to be part of this sort of collaborative work which offers plenty of opportunities to Tasmanian artists through accessing funding and markets well beyond the island. As well as the generous locals who have supported this project, several other Tasmanians contributed technical and artistic skills as set designers, costumes manager, sound recorders, safety and water cinematography crew.

For those interested, here are some sneak preview images from filming. Click on one to start slideshow view. Enjoy!