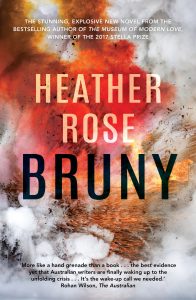 I recently read a Tasmanian based book about Tasmanian issues called Bruny by an author by the name of Heather Rose, who has written quite a few successful novels but this is the first one I’ve read by her. It is a fictional story about a bridge linking Bruny Island to the main land that gets blown up and a women who works for the united nations overseas coming back to negotiate with her brother about rebuilding it. He is the premier and her sister is in the opposition and her father just quotes Shakesphere lines in a nursing home. And a sinister conspiracy based on government greed and  corruption led by other countries.

I thought the book was quite revelent to today’s issues and the divisions created by two opposing groups and communities and how much secret deals governments do without consultation was very true. I thought the way it was written in the book was mainly the one protagonist explaining the reasons and background of key issues and people in her life and how their mind works on issues. It has a little bit of romance and a real Hollywood ending that would leave you reading until the last word. Highly recommended I thought for Tasmanian and non-Tasmanian mature readers who like secret government conspiracy.